Five-time Emmy winner Bill Persky has led a charmed life in show business. Handpicked by comedy legend Carl Reiner to write (and eventually produce) “The Dick Van Dyke Show,” Bill and partner Sam Denoff scripted many of the series’ most memorable episodes, including “Coast to Coast Big Mouth” and “That’s My Boy.” Later, the duo would create the groundbreaking sitcom “That Girl” and write comedy specials for Bill Cosby and Mary Tyler Moore and Bill (now flying solo) would go on to produce and direct hit shows like “Kate & Allie” “Welcome Back, Kotter” and “Who’s the Boss?”. Bill sat down with Gilbert and Frank to talk about his journey through the golden age of TV comedy and working with EVERYONE — including Steve Allen, Bob Hope, Tim Conway, Julie Andrews, Gene Kelly, Peter Sellers, and Orson Welles (to name but a few!). 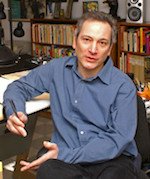 To kick off the launch of his new book, “Heroes of the Comics,” Gilbert and Frank are joined by their favorite illustrator, the incomparable DREW FRIEDMAN. While sitting and admiring Drew’s work adorning the walls of Manhattan’s Society of Illustrators, we managed to cover everything from Drew and Gilbert’s days at “National Lampoon” to Gilbert’s Lon Chaney, Jr. obsession to the time a 15-year-old Drew paid a visit to the home of the legendary Groucho Marx. ALSO: why Drew is Howard Stern’s favorite artist…”The Incredible 2-Headed Transplant”…Jerry Lewis kvells over Drew’s portrait…and the triumphant return of Milton Berle’s s*****g!

With an epic marathon of 552 (!) episodes of “The Simpsons” launching this week (on cable channel FXX), Gilbert and Frank decided to sit down with someone who’s been there from the very beginning (way back in 1988), writer, producer and former show runner, Mike Reiss. Mike joined the boys in Gilbert’s Chelsea apartment to share a few “dark secrets” behind TV’s longest-running prime time series, including the true story behind Itchy & Scratchy, how Groundskeeper Willie became a national hero, and why Marge’s bouffant is so tall (bet you don’t know the story behind that one.) Also, Mike recalls writing fake “letters to Santa” for Johnny Carson and working on one of our all-time favorite sitcoms, “It’s Garry Shandling’s Show.” You want more? How about Michael Jackson’s sound-alike, hookers in helicopters and Raymond Burr does Tiny Tim?

“Man of a Thousand Voices” Billy West has lent his unique talents to projects such as “Ren & Stimpy,” Matt Groening’s “Futurama,” “Looney Tunes” cartoons and of course, “The Howard Stern Show,” where he won over longtime listeners with his savagely funny impressions of Larry Fine, former Stern show writer Jackie Martling and late Cincinnati Reds owner Marge Schott. Gilbert and Frank rang up Billy at his home in Hollywood to compare notes on some of their favorite essential topics, including Bud Abbott, Gale Gordon, Peter Lorre, Al “Grandpa” Lewis, and the racism of Dick Tracy cartoons. PLUS: the true story behind the voice of Dr. Zoidberg! Billy jams with The Beach Boys! Jewish Frankenstein! Angry Munchkins! And Gilbert sings the theme song from “Problem Child”!

Gilbert and Frank return to the famed New York Friars Club to sit down with Gilbert’s old pal, magician-illusionist-comedian-provocateur Penn Jillette of Penn & Teller fame. In an amusing (and highly informative) hour, Penn shares some fond memories of Johnny Carson, George Carlin and Jerry Lewis, explains how his love of jazz inspired the hit 2005 documentary “The Aristocrats” (a movie he co-conceived and co-produced) and reveals the real, no-“B******t” story behind the death of legendary showman Harry Houdini. Also — the story behind the near-death of Gilbert Gottfried! 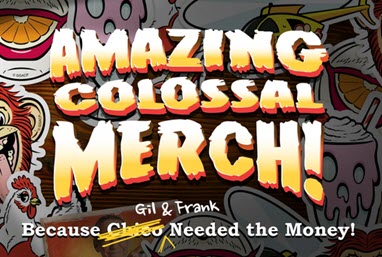